Personal blog on coding and maybe a little maths

Managing Complexity - Or "Why do you code in F#?"

This post outlines my views on the often overlooked and misunderstood topic of managing complexity in software development.

It answers questions I'm asked sometimes on why I prefer to develop systems in F#, a strongly typed functional-first language.

The next time someone asks I can refer them here!

The answer is I want to reduce and control complexity.

Simplicity and the flexibility it brings increases the chance of discovering the best abstraction for the domain. The classic example of this is 'everything is a file' in Unix. If you find this for your domain, it will put you streets ahead. Now you are minimising the inherent complexity of the domain.

Software languages and frameworks bring with them different degrees of accidental complexity.

Is the problem you are solving simple enough that you can handle this additional complexity? Are you sure that will always be the case?

The primary cause of software project failure is complexity.
Roger Sessions

The more I use a functional language the longer the list of patterns I consider to have excessive accidental complexity: 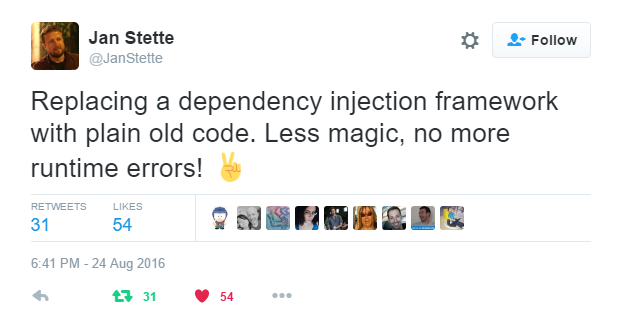 In an attempt to reduce complexity, there is a trend of building systems out of batches of data transformation scripts or moving to microservices. These don't reduce complexity; they dramatically increase it. Distributed systems are harder to reason about and change. Doing this to be able to scale out can make sense but it has to be done with great skill.

Rich Hickey has a brilliant presentation explaining the difference between simple and easy in software development. Every software developer needs to watch this. It is also very entertaining.

Some key takeaways are:

Let's say C can be 20%-50% faster than F# for a given algorithm. In my experience, getting to the best algorithm can produce an order of magnitude or more increase in performance. I've seen systems that have become so complicated that even though a better algorithm is known it can't be used because it would require a large rewrite. The complexity limit had been reached. This is particularly true of many C++ quant libraries.

Performance is complicated. It is often more about the movement of data than the calculation itself. I prefer to start in the highest level language (F#) and move an algorithm to the lowest level language (C) as a last resort. How often do I need to do this? Very rarely. Really only for access to chip optimised linear algebra and optimisation libraries.

Why is functional programming so simple? Because it comes from mathematics as the simplest possible programming construct. You don't have to understand category theory to benefit from this.

Functional languages were discovered, not invented. Many of you work in languages that were invented. And it shows.
Prof Philip Wadler

Functional programming is not a fad the profession can ignore. Its rigorous mathematical foundation means that it will be around forever. Software developers should be encouraged to learn the benefits it provides.

Data is simple. This is especially true in a strong type system that supports union types. Illegal state can be made unrepresentable.

Pure functions are simple. They always give the same output for the same input. They are easy to reason about and test.

Objects are complex. They fuse data and functions with side effects. They hold links to other objects. They are hard to almost impossible to reason about. Testing is painful. Software developers have to become familiar with the codebase and hold a large model of the system in their head. Don't let them go on holiday.

Choose immutability over the mutant

How do you handle queries and calculations (possibly long running) on a mutable domain model? Concurrent collections? Cross domain locking? What you have created is a bug paradise. They will get cosy and settle in for the long term.

In the domain I work in a number of statistics (risk attribution, backtesting, what if analysis) are about changing the state slightly and comparing the results of a calculation. How would you do this in a mutable domain model? Locking and transactions? Clone the world? Visitor pattern? I've been there and wouldn't wish it on anyone. 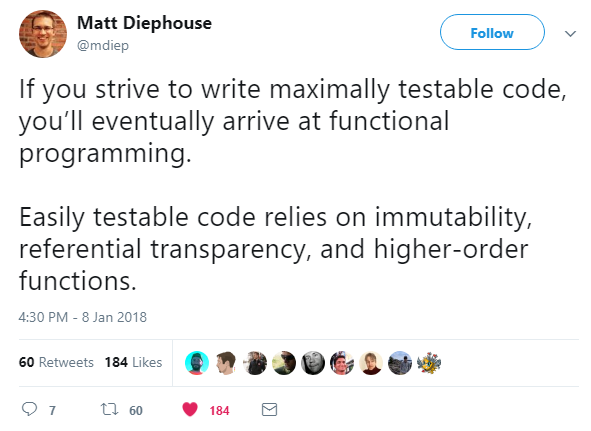 There is something missing between perfect data, pure functions and beautiful systems.

Functional programming allows functions to be passed around just like data. Functions can accept other functions as an input in a generic way. They are called higher-order functions.

This may sound alien but it provides a quantum leap in terms of code reuse and assembling systems. In fact, I didn't understand the full power of code reuse until I started programming in a functional language. 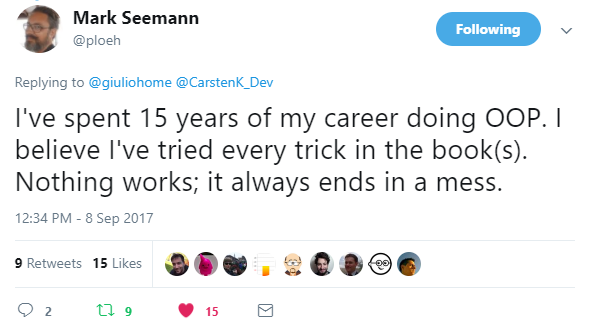 Object orientated programming has a poorer method of assembling systems. Objects are given to other objects. Dependency injection has been invented to make this easier. This helps but results in systems that are harder to reason about and increases complexity.

We need to talk about object oriented programming. We have patterns to work around its deficiencies. These, taken to the limit, make it look more functional. Every release of Java and C# add more functional features. Unfortunately, this will not ultimately fix these languages, it just increases their complexity. As an industry we need to decide how we should move on. 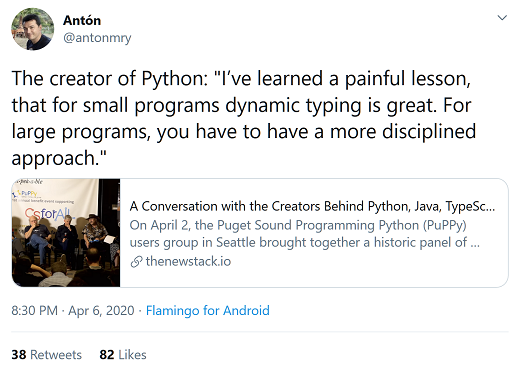 For a one off, short term, or simple project you can handle additional complexity in exchange for some quick productivity gains. This is what Python, Rails, R etc are great at.

For long term critical systems that evolve over time the focus must be on simplicity. The programming language and tools need to help us do this. This is why I code in F#. 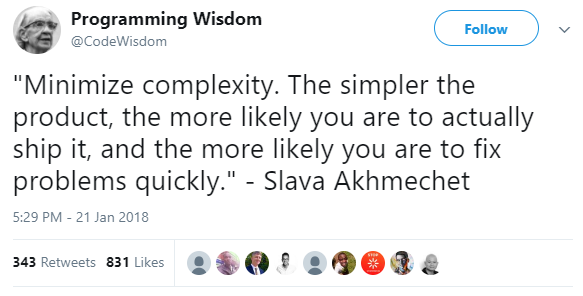